The CAPITOL - Salisbury's Showplace of the 1920s 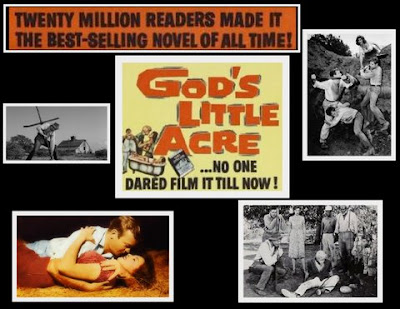 ﻿
GOD'S LITTLE ACRE, a 1958 American feature based on Erskine Caldwell's 1933 novel, was directed by hailed filmmaker Anthony Mann and shot in black and white by master cinematographer Ernest Haller.

The movie was as controversial as the novel, although unlike its source material, there was no prosecution for obscenity. Though both book and film were laced throughout with racy innuendo calling into question the issue of marital fidelity, it was the movie adaptation that may have been more alarming, inasmuch as it portrayed a popular uprising - or Marxist insurrection - in the southern U.S. by laid-off millworkers trying to gain control of the factory equipment on which their jobs depended.

Philip Yordan was officially given credit for the screenplay, but it was actually written by Ben Maddow, who had been blacklisted for his radical and suspected Communist activities during the 1950's Red Scare. Working without credit was the only way he could successfully submit screenplays.

When the film was first released, patrons under eighteen were prohibited from viewing, due to numerous sex scenes throughout, though over the years the film's scandalous reputation has diminished. Today's kids see worse on the Cartoon Network.

The film was an over-all box office failure, except in the southern U.S., where it did big business, especially at drive-in theatres. Released the same year and by the same company (United Artists) as THUNDER ROAD, GOD'S LITTLE ACRE was often paired as a double feature with the Robert Mitchum bootleg favorite, filling dark, dirt lots across Dixie throughout the 1960s.

(some of the above from Wikipedia)

FLICKS FROM THE FORTIES