IN PERSON AT SALISBURY THEATRES 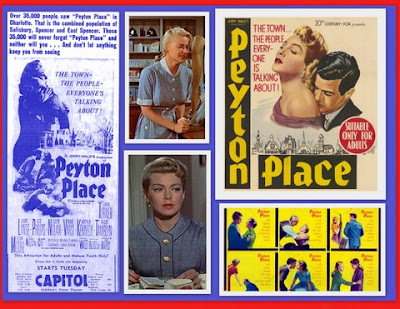 In 1956, a novel, written by a then-unknown author named Grace Metalious, was published by Fawcett Books. Written under the working title THE TREE AND THE BLOSSOM, Fawcett changed the title and released the novel as PEYTON PLACE.

By the time the dust had all cleared, PEYTON PLACE had sold twenty million hardcover copies and twelve million more in paperback. It remained on the New York Times Best-Seller List for 55 weeks.

Naturally, a movie would have to follow. And in February, 1958, the Twentieth Century Fox film hit the movie screens. To say it was a smash would be an understatement.

It's initial Rowan County engagement, at the CAPITOL THEATRE, ran for twelve days. Very few films ran that long in a town the size of Salisbury during the 1950s.

The movie, just as the novel,  was condemned by many churches worldwide as being totally immoral. It's probably fair to say that many of those who spoke against it on Sunday went to see it on Monday, then went back to see it again on Thursday.

Today, PEYTON PLACE seems as tame as TOY STORY. The film revitalized the career of Lana Turner and made a star of Hope Lange.

Then in 1964, PEYTON PLACE became a prime-time television series on ABC, enjoying equal success, running as many as three episodes each week. By the time the series was canceled in 1969, 514 episodes had been produced. The series made superstars of Mia Farrow and Ryan O'Neal.

As for the woman who started it all - - suffering from cirrhosis of the liver from years of heavy drinking, Grace Metalious died February 25, 1964 at the age of 39. Sounds as if she lived in her own little PEYTON PLACE.
Posted by Mike Cline at 6:44 AM

The 1920s: PROHIBITION, CAPONE and the MOVIES 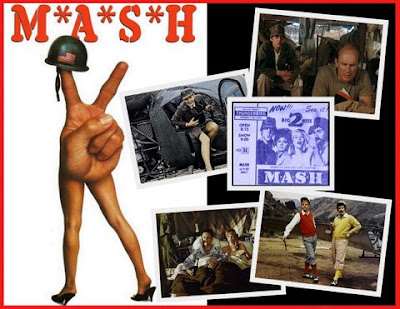 107
That is the number of days M*A*S*H played Salisbury movie screens. That is a lot. Over three calendar months.

Here was a movie, adapted for the screen by Ringgold Wilmer "Ring" Lardner Jr., once an American journalist and screenwriter blacklisted during the Red Scare of the late 1940s and 1950s and the last surviving member of the Hollywood Ten at the time of his death in 2000.

A movie about the Korean War released during the Vietnam War. Risky, many in the industry said. But Twentieth Century Fox took a chance, and the chance reaped huge dividends, both on the theatre screen and the TV screen as well.
---
M*A*S*H played sixteen different times in Salisbury (the initial engagement lasted three weeks).

During the World War II years, the average American went to the movies three times per week.
The film studios produced lots of great movies during that time, and the U.S. public, living a life of fear and concern, sought entertainment. The movies provided that entertainment. Remember, there was not yet televison in the American home.

The usual theatre program during the early-to-mid 1940s included a full-length feature (of course), but also a cartoon, comedy or travelogue and the latest newsreel.

The newsreel was as important to home front Americans as was the feature. Here they could see the first video representation of the war events they had heard on the radio and read in the newspaper two-to-three weeks earlier.

Besides churches, the small-town movie theatres were the most common places of assembly. To support the war effort, patrons bought millions of dollars of War Bonds at their local movie houses.

SALISBURY MOVIES IN THE 1950s