"Well, I'm all broken up about that man's rights." 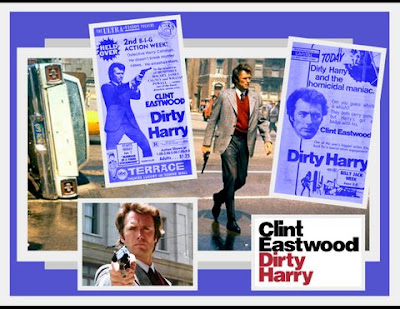 "Well, let's have it."
"Have what?"
"A report! What have you been doing?"
"Well, for the past three quarters of an hour, I've been sitting on my ass in your outer office waiting on you."
"Damn it, Harry, that's the Mayor you're talking to!"

Harry Callahan didn't care. He lived by his own code, even if he did carry a badge. He was often in trouble, with the thugs on the streets and his own people on the force. Just one of the reasons they called him Dirty Harry.

The 1971 Warner Bros. release, DIRTY HARRY, was a smash and would be the first of a five film franchise spanning seventeen years. There probably could have been ten Harry Callahan films, as far as the public was concerned, but Clint Eastwood put a halt at five.

DIRTY HARRY opened for the first time on Christmas Day, 1971. The movie would eventually have eleven different engagements in Salisbury and would be on local screens a total of eighty-six days. An amazing feat.