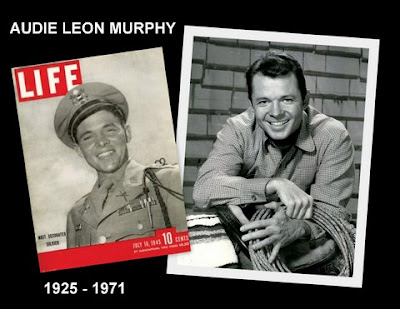 The most decorated U.S. soldier of World War II (33 awards, including the Congressional Medal of Honor),
also decorated by the governments of France and Belgium, was born to poor Texas sharecroppers. He tried to enlist in the service when the United States entered WWII but was rejected because he was too young.

He tried again, this time falsifying his age, and was accepted. During his stint in Europe, he was credited with killing 240 German soldiers, and wounding and capturing a good many more.

After he left active service in 1945. James Cagney invited him to Hollywood and paid for acting and dancing lessons for the young man. Thinking Audie didn't have what it took to be in movies, Cagney let him go. Audie stayed around, finally getting a few small parts.

MGM signed him in 1950 to star in THE RED BADGE OF COURAGE. Reviews said that Murphy was adequate, but the film didn't perform at the box office.

No bother. Universal-International liked him and put Audie under contract to star in westerns, which were the hottest film genre at the time. With his unassuming Texas drawl, his westerns became very popular.

The public loved Audie Murphy on screen. Universal made mounds of money with his movies. Anytime my family's drive-in theatres played an Audie picture, the lot would be full.

In 1955, Universal filmed Audie's autobiography, TO HELL AND BACK, and cast Murphy as himself (against Audie's wishes - he suggested they use Tony Curtis instead). But he was overruled.

TO HELL AND BACK was a smash hit, becoming Universal's highest-grossing movie, a record it held for 20 years until surpassed by JAWS in 1975.

Murphy appeared in a total of 44 features plus a few television appearances. He was a successful businessman, ranch owner and song writer. He wrote several songs recorded by Dean Martin and Eddy Arnold.

In May, 1971, Murphy, on his way to a business meeting, was killed in a private airplane crash near Roanoke, Virginia. He was a month shy of his 46th birthday.

He was buried with full military rites. To this day, the only grave site in Arlington National Cemetery visited by more people than Audie's is that of JFK.