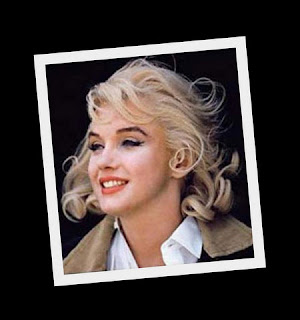 The word "legend" is greatly over-used these days, but certainly not in the case of MARILYN MONROE.

To say Marilyn (born Norma Jeane Mortenson) faced many hardships in her life would be greatly understating her situation.

Her widowed and mentally ill mother abandoned baby Marilyn to a sequence of foster homes. She was nearly smothered to death at age two and nearly raped at six. By the age of nine, she was a resident of the Los Angeles Orphans' Home. She married a man she called "Daddy" when she was 16. He went into the miltary, and they divorced in 1946.

In 1947, 20th Century Fox gave Marilyn an acting contract but didn't renew it after one year. Columbia Pictures signed her for six months. After receiving good notices for a small role in the 1950 noir thriller THE ASPHALT JUNGLE, Fox re-signed her, this time for seven years. By 1953, Marilyn was the hottest star on the Fox lot.

She married Joe DiMaggio, the New York Yankees baseball great, in January, 1954. The couple divorced ten months later. In 1956, Marilyn then married playwright Arthur Miller. This would be a 4 1/2 year tumultuous relationship, ending in a January 1961 divorce.


Marilyn was fired by 20th Century Fox during production of her 32nd feature SOMETHING'S GOTTA GIVE, co-starring Dean Martin. The script was reworked and recast, with Doris Day and James Garner taking the lead roles. It was released as MOVE OVER, DARLING.

In 1972, actress Veronica Hamel bought the home in Brentwood, Ca., where Marilyn had died. Hamel hired a contractor to replace the roof and remodel the house, and the contractor discovered a sophisticated eavesdropping and telephone tapping system that covered every room in the house. The components were not commercially available in 1962 but were in the words of a retired Justice Department official, "standard FBI issue." This discovery lent further support to claims of conspiracy theorists that Marilyn had been under surveillance by the Kennedy family and the Mafia. Hamel had the bugging devices removed from the house.
Posted by Mike Cline at 6:38 AM