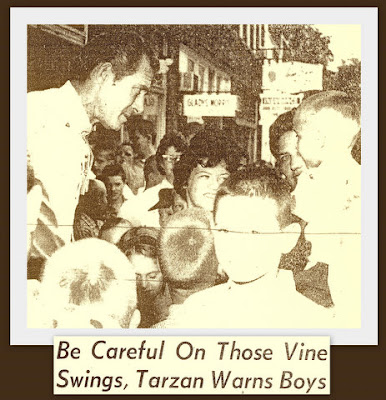 A screaming mob of kids greeted him with more racket than a pack of chattering monkeys.

He was cornered by one anxious mother who asked him to explain to her son the dangers of imitating Tarzan by swinging on vines. He had already come close to hanging himself once, she explained.

Tarzan gladly proffered the admonition. He warned all the kids of the dangers. "After all, we take days planning each stunt. They're dangerous, and I'm scared every time we attempt one. You can take all precautions, but something still might go wrong."

For a few brief minutes he gained seclusion in the office of Manager Paul Phillips where he signed autographs and was interviewed by the press and radio.

It was in those two TV western series that most people got to know one of Hollywood's all-time great stunt men. He made 113 episodes of the two series, has appeared in 35 movies as an actor and has appeared in more than 150 movies as a stunt man.

Mahoney is the 13th in a line of screen Tarzans. He doesn't mind being typed as the jungle man and enjoys the role. "Tarzan's Three Challenges" is the second Tarzan movie Mahoney has made. His first, "Tarzan Goes To India," released last year, grossed more than any previous Tarzan feature.

Mahoney plays a more mature character in the role than the previous actors. Actually, he is now portrayed closer to character than the older movies show. "Edgar Rice Burroughs created Tarzan as an educated man who preferred the African jungles to the asphalt ones," said Mahoney.

Today, Tarzan is articulate and modern. No longer does he talk in grunts and guttered sounds. The plot of the films are now made to appeal to adults as well as kids.

Mahoney also scoffed at the slur made recently on Tarzan's morals in relationship to Jane. He quoted the page and book where the ape man is married. "It's found on page 376 of "The Return of Tarzan," the second book of the series written by Burroughs.

In the current movie, Jane and Boy are left in the African jungles while Tarzan flies out of the continent to Thailand. "The reason we left them out of the last two pictures is because there was no place for them," Jock stated.

"Tarzan's Three Challenges" were actually four. "The biggest challenge was my finishing the movie alive. In ten days I lost 40 pounds. For the last eight days I was sick with pneumonia and had to be wrapped in ice between scenes. I passed out a number of times. My biggest fear was 'roasting' my brain since I was running a fever of 102 degrees."

The movie was two months in the making in Thailand shortly before the monsoon season. Mahoney does his own stunts in the feature. But good sense sometimes dictates caution. For instance, Tarzan and his opponent dive 200 feet from a bridge with a rope tied to their legs. "I did the first and last 20 feet of the dive," said Mahoney, "in-between is a dummy."

Another time caution is used is when he wrestles with a leopard. "Only the lighter cats, not a lion or tiger, and the leopard was sedated to a degree," he added.

Jock Mahoney doesn't go in for lifting weights to build up his muscles. He prefers gymnastics and swimming. He is married and has two girls (one is actress Sally Field) and a boy. Oddly enough, he and his family reside in Tarzana, California, named for his screen character.

Before surrendering to the mob of kids filling the Capitol auditorium, Mahoney granted one last request to WSAT's Dick Jones - - he did a Tarzan yell Jones could use on his radio show.