BUTCH AND THE KID 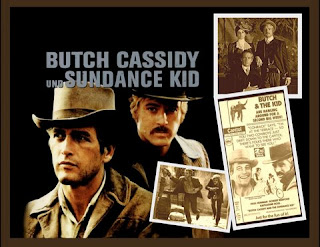 Yep, they dynamited trains and were dynamite at the box office.

Twentieth Century Fox released this western on October 1, 1969, and Salisbury was among the cities to get it on opening day.

Take the genius of pairing Paul Newman with Robert Redford, throw in the smash B. J. Thomas song hit "Raindrops Keep Fallin' on My Head," and it was off to the bank. Fortunately, Butch and the Kid weren't around to stick it up.

During its initial release period, BUTCH CASSIDY AND THE SUNDANCE KID had eleven different bookings in Salisbury.

Twentieth Century Fox pulled the movie from release at the end of 1971, and put it in the can until the spring of 1974.

They re-released it after Newman and Redford struck gold again in THE STING, and history repeated itself. From April through December, 1974, Salisbury played "The Hole-in-the-Wall" guys five more times, with each engagement being a full week.