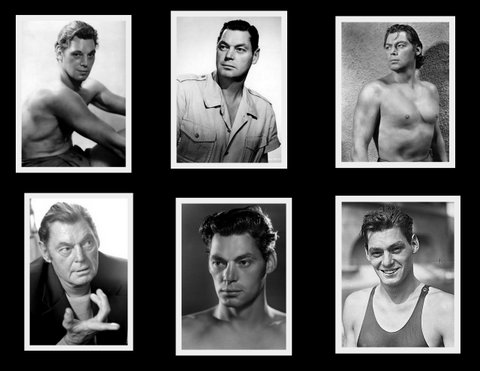 Discarding his Tarzan loincloth in 1948 after twelve appearances due to age and a salary dispute, Olympian Johnny Weissmuller wasted no time in obtaining another jungle gig. Columbia Pictures signed the Olympic medal winner to a series of B-budgeted Jungle Jim features, based on the popular King Features comic strip character.

The first in the series, aptly titled JUNGLE JIM was on theatre screens the same year as Johnny's final Tarzan adventure.

He would portray Jungle Jim in a total of thirteen kiddie fare films until 1954 when Columbia lost the rights to the character. Not content to stop production of the popular Saturday matinee fillers, Johnny stayed on with Columbia for three more features. No longer able to use the Jungle Jim name, Johnny Weissmuller played a character named...Johnny Weissmuller. King Features couldn't stop him from using that moniker.

Ironically, after stoppage of the Johnny features, Columbia re-acquired the rights to the Jungle Jim character, and Weissmuller moved to the small screen as JUNGLE JIM in 26 half-hour TV episodes.

"Baby Boomers" in the Charlotte area may remember watching the TV show on WSOC weekday afternoons as part of their Jungle Theatre program.

And, the Weissmuller features, both TARZAN and JUNGLE JIM, initially played on WSOC in the Charlotte market during the early-to-mid-sixties. In the Triad market, the TARZANs could be seen on WGHP-High Point, and the JUNGLE JIMs on WFMY-Greensboro.