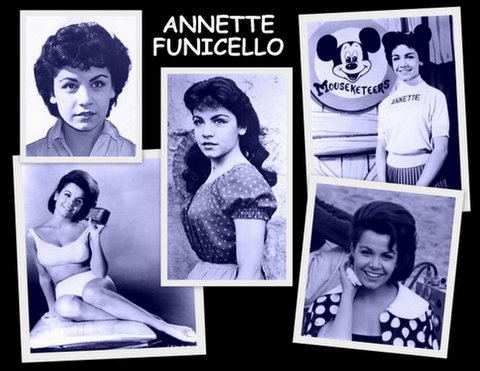 WALT DISNEY'S MICKEY MOUSE CLUB hit television October 3, 1955, and from the outset, one of those talented Mouseketeers jumped out of the small black and white screen more than any other. Her name was Annette Funicello.


She became an instant favorite of baby boomer boys and girls, perhaps for different reasons. Girls imagined themselves as being Annette, and the boys wanted Annette to be their "woman."

Well, we could dream, couldn't we?


Quick to see that he had, yet, another TV "gold mine," (Davy Crockett being the other), Disney
pushed Annette to the front of the line.
All of a sudden, there were all kinds of Annette merchandise for her fans to purchase; dolls, paper dolls, Annette books, clothes, jewelry and 45rpm records.
In addition to being the most popular Mouseketeer, Miss Funicello's role on the MM CLUB was expanded when she was put into the SPIN AND MARTY serials, which ran on the program.


Then she was given her own MM CLUB serial and made appearances on Disney's prime-time ZORRO series. Walt loaned her to Danny Thomas for a full season, in which she played a foreign exchange student from Italy who lived with Danny's TV family.

Disney used Annette in only four of his own movies, but
lent her out to American International for a series of BEACH PARTY movies with Frankie Avalon. These teen flicks were so popular with 1960s audiences that they seemed to go on forever.

Even though some of the beach party posters show Annette in a bikini, Disney inserted a clause into her loan-out contract that she could only wear one-piece swim suits in the movies. (Thanks a lot, Uncle Walt.)
A series of beach movies, then a group of pajama parties, then a series of winter ski resort movies, then a few stock car racing movies.

One plot could probably fill out them all, but the teens of the day didn't care.
Though none of her TV or movie work approached PLAYHOUSE 90 or CITIZEN KANE status, Annette Funicello was a baby boomer icon.