THEY DID IT ALL! 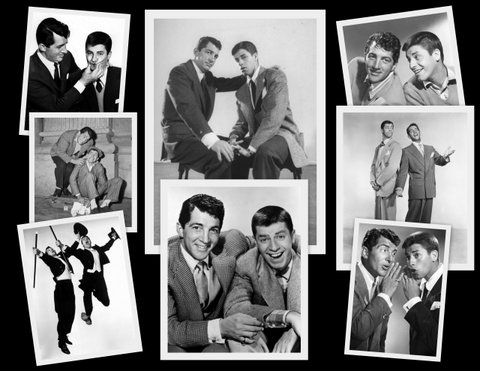 DEAN MARTIN AND JERRY LEWIS were the hottest act in show business for a decade...bar none.


Teaming for the first time July 24, 1946, the duo caught fire instantly with the public, and they never looked back.


The team conquered everything they attempted...night clubs, radio, television, public appearances and movies.

In their first feature, MY FRIEND IRMA, Martin and Lewis were not the stars of the film. They were supporting players, an experiment to see how movie goers would react to them.
No problem with acceptance. After expanded roles in a sequel, MY FRIEND IRMA GOES WEST, it was so long Irma, and the boys were own their own.


Starting with AT WAR WITH THE ARMY, Dean and Jerry would make 14 features together in the next seven years.

EVERY Martin and Lewis movie was a smash.

How many of today's top "movie stars" can claim that they have had 14 hit movies consecutively?
I can't think of any. Without mentioning any names, most of our current crop probably won't have 14 commercial hit movies in their entire careers.

Question - - When was the height of the Martin and Lewis partnership?
Answer - - Every day they worked together.

Still at the top of the show biz heap, with millions of dollars in contracts ahead of them, and ten years to the day of their first teaming, Dean Martin and Jerry Lewis dissolved their partnership and went their separate ways...with each of them to be heard from again.