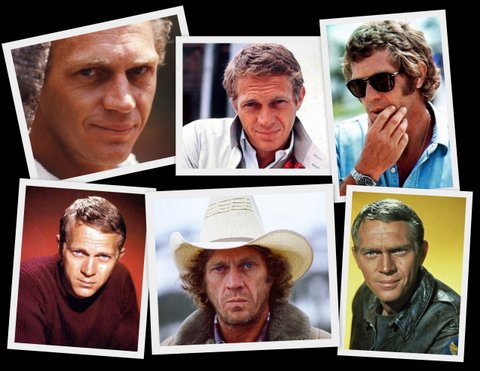 "When a horse learns to buy martinis, I'll learn to like horses."

"Sometimes kids ask me what a pro is. I just point to John Wayne."

"When I believe in something, I fight like hell for it."

"I live for myself and I answer to nobody."

"I'm not sure whether I'm an actor who races or a racer who acts."

A dispute over billing prevented McQueen's playing the Sundance Kid to Paul Newman's Butch Cassidy. They later did THE TOWERING INFERNO together with billing problems worked out. McQueen and Newman had exactly the same number of lines of dialogue in INFERNO.

While Newman appears throughout THE TOWERING INFERNO, McQueen doesn't appear until the midway point of the film. Newman had the big entrance in the feature, so Steve demanded the big exit, got it, and walked away with the movie.

Of all the roles he played, Lt. Frank Bullitt was his personal favorite.

He was offered the male lead opposite Audrey Hepburn in BREAKFAST AT TIFFANY'S and wanted it, but his WANTED: DEAD OR ALIVE TV shooting schedule prevented it.

Steve was supposed to star in 1977's THE GAUNTLET, but when hearing the female lead would be Barbra Streisand, he pulled out of the project. Clint Eastwood and Sondra Locke were then cast.